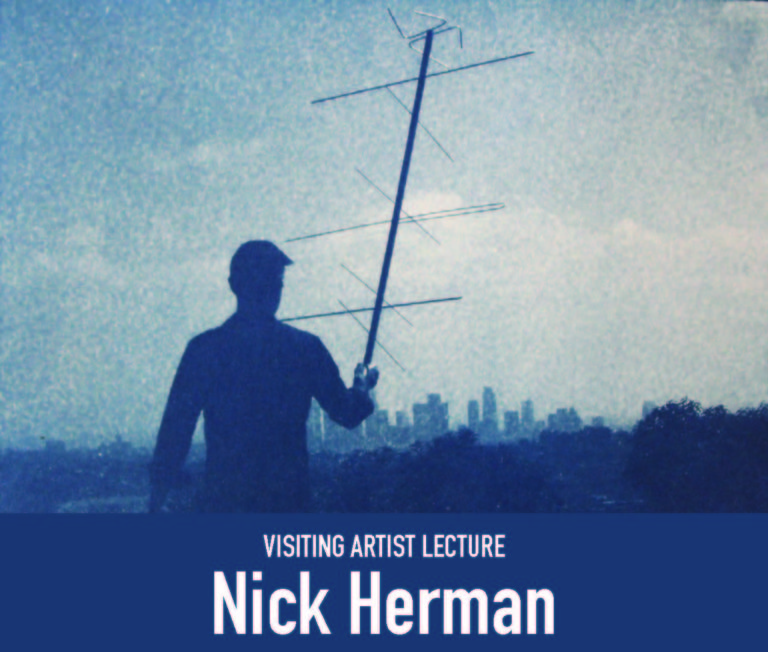 Co-sponsored with the Weaving Lab

What do we mean when we discuss an animation’s “frame rate” or say a photograph is “in development”? What is rastering? What is a signal to noise ratio? Employing photography, collage and sculpture to engage these technical terms and the history of communication systems, Herman uses the analogy of an antenna to query the way structure and rhythm impact both fabrication techniques and a thing’s reception in the world. Engaging methods of reproduction and distribution as a point of departure, Herman’s work exploits “noise” or the break down of data, to explore the role materials and patterning plays in perception. Finding both beauty and intellectual clarity in these disruptions and moments of metamorphose, Herman reveals how symbolic logic and myth continue to resonate in our hyper-digitized world. As part of his presentation Herman will discuss his project for Weaving Lab: Digital Residency.

Bio:
Nick Herman (b. 1973, Minneapolis, MN) has an MFA in sculpture from The Yale University School of Art and a BA in religious studies from Macalester College. Solo exhibitions include URANANTENNA at Grice Bench Gallery (Los Angeles) in 2017; Hide at Artist Curated Projects (Los Angeles) in 2016, and FATLAND at LAXART (Los Angeles) in 2011, as well as many group shows. Herman’s novella Fatland was published by LAXART in 2011. His writing has been published in many journals including Cabinet, diSONARE, and Tokion, and numerous art books and catalogs. His artist publications and imprint ANTEPROJECTS are in major library and museum collections including The Grunwald Center at UCLA, Bibliothèque Kandinsky at Centre Pompidou, and the Museum of Modern Art. His collaborative project, The Modeling Agency, had a solo exhibition titled Tektite (redux) at The Armory Center for the Arts in Pasadena (2016). Herman was an artist-in-residence at The Chinati Foundation in 2011.